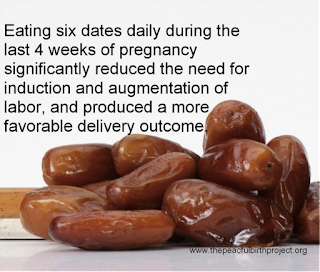 The date fruit is the product of the date palm, a tree native to Northern Africa and the Middle East. There is a wide variety of dates including the better-known Medjool and Deglet Noor. Each variety is unique in size, sweetness, flavor, and texture. Containing at least 15 minerals such as potassium, calcium, iron, magnesium and zinc, 23 types of amino acids, vitamins, carbohydrates, protein, 14 types of fatty acids, dietary fiber and a lot more, these sweet little fruits are a nutritional powerhouse. [International Journal of Food Sciences and Nutrition, 2003]

A study published in the Journal of Obstetrics and Gynaecology  concludes that eating 6 dates daily during the last four weeks of pregnancy “significantly reduced the need for induction and augmentation of labor, and produced a more favorable, but non-significant, delivery outcome”.  Some significant findings:
·       Cervical dilation was significantly greater in the date-eating mamas upon arrival at the hospital
·       83% of mothers who consumed dates had their membranes intact upon admission at the hospital
·       96% of the women who ate dates went into labor on their own
·       Use of Pitocin (synthetic Oxytocin) was significantly lower in women who consumed dates (28%), compared with the non-date fruit mothers (47%)
·       The latent phase of the first stage of labor was almost 7 hours shorter in the date-eating mothers compared with the non-date fruit eaters (510 min vs 906 min). Not bad for eating a few dates!