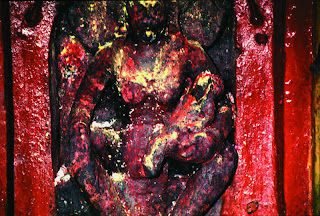 One of the problems of today is the good/bad split. My 6-year old granddaughter (while we’re watching on television the cartoon myth of Indra being jealous of villagers’ worship of Krishna) asks me if Indra is a bad guy. Then, reading the Amar Chitra Katha comic book version of ‘Indra and Sachchi’ she says that she thought Indra was bad and here he’s good, the hero. She’s confused.
According to me the sophistication of Indian cultural heritage is precisely this ‘confusion’--this both/and not either/or. In these dramas gods are doing bad things and demons doing good things. This is a nuanced morality—actually we’re all both ‘bad’ and ‘good.’

This image of Hariti, obviously under worship as it is smeared with vermillion and oil, is probably from Nepal. That is where I have seen Hariti streetside shrines—and in Kathmandu there is a small, beautiful wrought iron acknowledgement of her in the prominent hilltop stupa Swayambhu. Interestingly it is the only area where you are not allowed to take photographs.

Who is Hariti? Scholars Shanti Rosario and Geoffrey Samuel, in their book Daughters of Hariti: Childbirth and Female healers in South and South and Southeast Asia write of the figure Hariti.
Her worship seems to have been particularly important in Gandhara and Mathura (present day Pakistan and North India, first century BCE to fourth century CE). Her legend describes her as a child-eating demoness who was converted by the Buddha. Perhaps, though, this negative depiction reflects a process in which respected yaksha and yakshi (nature spirits, deities of prosperity and fertility) such as Hariti and her consort Pancika were brought into a subordinate relationship with the newly developing Buddhist and Brahmanical pantheons."

In other words, to begin with she was a female both/and—both ‘bad’ (if your baby died—she was responsible thus the term ‘child-eating’. If everything went fine she was ‘good’.) It’s only when the high or dominant religions come along that she gets demonized and demonic ONLY.
I don’t know of the historical connections, but she bears a striking resemblance to the birth goddesses or, if you will ‘spirit guides,’ of indigenous midwives; Shoshti Ma in Jharkhand and Bengal, Bemata in other parts of North India and Satavi in Maharashtra. It is a tribute to Hariti and women who do birth and healing work that Rosario and Samuels named their book ‘Daughters of Hariti’!