BIRTH FROM HIS MOTHER’S SIDE, HIGH CESAREAN RATES, AVOIDANCE OF THE YONI AND DEATH OF THE MOTHER.

Okay, so what are we to make of all this Siddhartha, Gautama the prince of the Sakkya clan—his birth from his mother’s side. This unnatural birth puzzles me, puzzles me as a woman, as a mother, as a grandmother—and a rather questioning, rebellious and thinking person. (My husband says I ask questions which aren’t meant to be asked, and this is perhaps one of those.)

Let’s take them bit-by-bit. First being born from his mother’s side, why should this trouble me? I’ll tell you why, because in Delhi, where I live, according to reliable estimates up to 80% of births in corporately owned hospitals are by cesarean section, a major operation in which a woman’s abdomen is surgically opened and the baby is lifted out. Even the World Health Organization, which is no hotbed of radicalism, states that nowhere in the world should a c-section rate be more than 15% of all births.

It would be different if these women were emergency cases, or terribly poor and malnourished women, but no. These are well off, well fed, over-coddled not overworked women. Other research shows that a woman is 5 times more likely to have a c-section in a private hospital than in a government hospital (which caters to poor women whose health is already compromised even before they become pregnant.)

So these babies, born from their mothers’ sides are supposedly special babies, definitely by class, probably by caste, and even by gender, some say. (One doctor who is vocal in protesting sex selective abortion and practices at Apollo Hospital told me that a very large percentage of newborns in that nurseries are male babies—which would indicate the ‘special’ nature of the male child and that the aborting of a female fetus after sex-determination was responsible for that overpopulation of male infants.) So I am asking if there is any correlation between the birth of Siddhartha from his mother’s side and the c-section epidemic in Delhi, but also in the rest of the world.

AVOIDANCE OF THE YONI

Considering the above I am deeply suspicious of this imagery in which ‘spiritual’ males emerge from their mothers’ sides.

(1) (Indra’s mother): “This is the ancient proven path by which all the gods were born and moved upward. By this very path he should be born when he has grown great. He should not make his mother perish in that way.

(2) (Indra): ‘I cannot come out by that path; these are bad places to go through. I will come out cross-wise, through the side…

And interestingly all visual depictions of Buddha’s birth which I retrieved from Lumbini have Indra present at the birth! Granted we have no way of knowing whether or not these are later ‘Hinduized’ add-ons to the birth narrative…but our inherited views remain the same of these spiritual teachers and their supra-natural origins.

Indra, himself, didn’t have much good to say about women in the Rig Veda

The mind of woman brooks no discipline, Her intellect hath little weight” RV VIII 33.17. (Ironically this aphorism is put in the mouth of a heroic warrior known for neither his intellect nor his self-discipline.) “With women there can be no lasting friendship: hearts of hyenas are the hearts of women” RV X 95.15

Interestingly the demons of the Rig Veda, are known by matronymics rather than patronymics. Vritra is a Danava, son of Danu. In one passage, describing his death, the Rig Veda links the two in imagery of cow and calf: “The vital energy of Vritra’s mother ebbed away, for Indra had hurled his deadly weapon at her. Above was the mother, below was the son; Danu lay down like a cow with her calf” (RV 1.32.9, translation O’Flaherty).

Email ThisBlogThis!Share to TwitterShare to FacebookShare to Pinterest
Labels: AVOIDANCE OF THE YONI AND DEATH OF THE MOTHER., BIRTH FROM HIS MOTHER’S SIDE, HIGH CESAREAN RATES

Lumbini—the birthplace of the Buddha, the death place of his mother 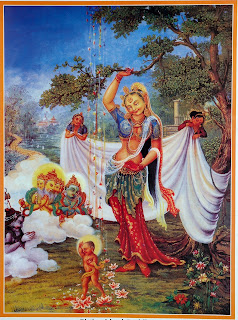 Lumbini—the birthplace of the Buddha, the death place of his mother

Mahamaya or Maya Devi as they refer to her in Nepal, was the mother of the Buddha. She gave birth to him (and this is historical, not mythological) at Lumbini in the Terrrai area of Nepal, in the foothills of the Shiwalik range. To the visitors’ eye, this terrain is so much like Gorakpur across the man-made border in India. Fields plowed by bullock carts, bicycles aplenty in the small towns, occasional mango or sal groves providing respite from dusty roads. Yes, very much like India.

So we ventured to Lumbini, calling ourselves the Lumbini Ladies. Actually we were planning a trip to Lhasa but the Chinese repression of Tibetan activism put a halt to those plans, so no, it was Lumbini instead. We flew to Bhairahawa on a tiny 16 seater Buddha-Air plane. Unfortunately clouds obscured the magnificent peaks of Fishtail and Everest that day.

Now what I really want to write about is this woman who gave birth to this infant who became enlightened, taught, and started a religion (is it a religion? Yes. If you go to Lumbini and see the balkanization of this site into Theravada, on one side of the river, and Mahayana on the other, you’d definitely say it was a religion.) So many temples and monasteries standing rather pompously representing co 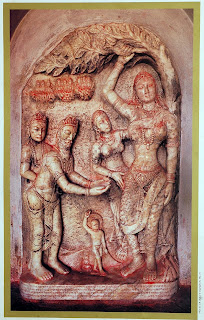 untries, rather like a UN of Buddhists. But monks are hardly begging, the trappings of money are everywhere.

Maya Devi, the queen of Sakya king Suddhodana of Kapilavastu was on her way to her maternal hometown Devadaha for the birth of her child. According to the pamphlet distributed at the site “While walking through the Lumbini Garden Maya Devi took a bath in the Puskarini and felt labor pains, took the support of the branch of a tree and gave birth to the Holiest prince.”

Three things stand out in this story. First, which I had known before, was that Siddharth was born out of Maya Devi’s side, not the more mundane passage, the birth canal. Supposedly this rather un-physiological phenomenon signifies that the child/male born in this manner is supra-human--so he must be born in a special way. Interestingly, Indra, in the Rig Veda, was also born from his mother’s side—even though his mother begged him not to, saying that it would kill her.

Secondly, which I did not know before, was that Maya Devi died within a week of his birth. Disturbingly, this hearkens back to Indra’s mother’s plea. Do mothers of special male figures often have to die? Or are we to read this maternal death in another fashion? Also interesting is the fact that in the poster images of Maya Devi distributed at the sight, one in calendar art style and another a beautiful marble sculpture, she is depicted as more coquettish than maternal! Actually, as far as I can see there is absolutely no difference between the representations of Maya Devi and those of the Yakshi so common in Indian art. The Yakshi figure is also holding a tree, is svelte and voluptuous.

Thirdly Maya Devi was on her way to her maternal home when she birthed and died. Evidence suggests that her other sisters-in-law, who were also from the same area, Devadaha, did not return to their maternal homes for their deliveries.

What are we to make of all this?

Posted by Janet Chawla at 1:28 PM No comments: