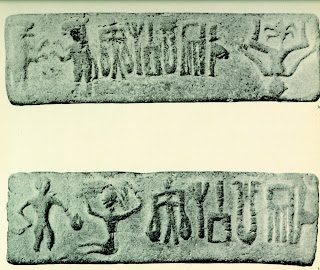 This is a most fascinating comment on the female power of birth….and it is almost 3000 years old. It is a ‘Harappan Seal’ from the Indus Valley Civilization (now in Pakistan). The proto writing has not yet been deciphered. I will tell you my interpretation of what these images are telling us.

First, in the upper right hand corner we see an upside down woman with an emanation coming out of her vagina/yoni. I call this an emanation because it is not a baby, nor a plant—it is energy—that of the life force which brings both babies and vegetation into being, into this world. You will notice that her arms are on her knees in an almost meditative position.

Other images that evoke birth are the pregnant letters—see the big bellies on the right hand sides of both seal faces.

If you look to the left side of the upper seal you see two theriomorphic images, that is beings which have human bodies, but animal heads—they seem to be conversing. Animal heads on human bodies are not uncommon in later Indian imagery—for example Ganesh, the Yogini temples, many, many gods and goddesses are sometimes rendered with animal heads. I understand this to indicate shamanism, particularly the ability of the shaman/possessed to channel the spirit/perceptions/abilities of that animal.

Okay, so we have a woman with the life force coming from her vagina, and two animal/people exchanging something…what we know not….until we go down to the bottom seal.

About the bottom seal—it’s from Pupul Jayakar’s book The Earthen Drum. In that book she writes that the bottom image is human sacrifice. I always doubted that….you don’t picture a woman with life coming out of her body on one side of a seal and then chop off her head on the other. It doesn’t make sense. When I approached her and questioned her interpretation, she said that yes—that was probably wrong. But in the book it also said that the man approaching the woman was holding the mithuna symbols, the cup and the knife, the chalice and the blade—male and female imagery.

Now look at the woman he is approaching. She is sitting, her hair is askance, all over the place, sticking out. This signifies with two meanings. One is that women still, when they get possessed (and they still do in some areas get possessed either by demons, or more often the devi, the goddess) let their hair fly, loose, open, uninhibited. The other meaning is that she is holding a sheaf of grain on her head during harvesting. Until recently, before mechanization, this was a common sight in agricultural areas.

In my interpretation, rather than killing (human sacrifice—chopping off her head) this image shows the communication from woman to man about LIFE—both the life the harvest provides for people, and the role of woman as the bearer of life when she gives birth. She is channeling her knowledge (gnosis, gyan) of life. The man is approaching her and will receiver her knowledge/experience, gather it, harvest it and return enriched.

These seals tell us things about ancient peoples’ lives. But we need to be aware that this birth power—and its symbology—has been codified and used extensively in pursuit of barkat—growth of riches, knowledge, power. More about that later.