Parvati's Menstrual fluid and the Birth of Ganesh 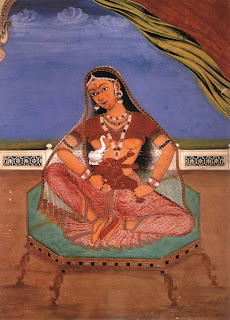 This is a fabulous image depicting another story of the birth of Ganesh. Many of us know the myth of Parvati bathing and asking her son to guard the door and Shiva approaching only to find his way blocked by this child. In his anger he takes out his sword and beheads the boy. Upon finding that this was indeed his son he (with his magic powers) restores his life and replaces the head with that of a nearby elephant. Ouch!

This image, however, tells a far more peaceable tale. I think it’s to be found in the Ling Puran. Anyway, Parvati wants a baby and Shiva doesn’t. She begs for a child, he says “No, no, we’re perfectly content just the two of us. She persists and begs him “Please, I want a baby.” (Sound familiar?) Parvati keeps bugging him. Finally Shiva relents and tosses her red dress-cloth (read menstrual cloth) into her lap. She is irritated. “Don’t tease me, this is just my red dress.”

Shiva says “Listen to me, just put that red cloth to your breast.” Parvati, disbelieving but obeying, puts it to her breast. Lo and behold, there appears Ganesh, her desired baby.

Now what’s going on here? What I like is that encoded in this story is a very woman-centered version of female biology and the creation of a child. There is no mention of male seed or the family line.

Ganesh is born first from female desire, not patriarchal dictates. Secondly he is born from her bodily power, menstrual fluid, and not male seed. Thirdly it is the womanly act of breastfeeding which quickens the infant, nurtures and brings Ganesh fully alive!

This is just one example of the woman-centered, female body centered truths encoded in some Indian myth, story and image.