When I was learning about how rural and basti women gave birth 20-25 years ago, what was almost routinely mentioned was ‘….and I squatted on the bricks—and then the bachcha was born.’ I was not then surprised that a University of Pennsylvania team of archeologists excavating a site in Egypt found ‘birth bricks’, probably, they surmised, used by women of the nobility as they birthed.

The first image above is of a basti woman simulating the position she would take for the birth during a MATRIKA workshop.

The second, below, is the detailing on the birth brick excavated by archeologists. You can vaguely see the birthing Egyptian woman on the right and the midwife in the lower left hand corner, ready to catch the baby. 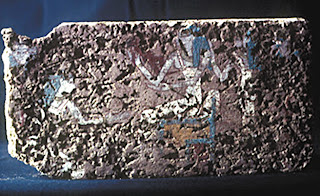 Of course, for me, it’s quite affirming to see the same custom/position having been used across geographical and chronological boundaries.

The practical aspect of a birthing mother squatting is recognized, the pelvic bones, muscles, ligaments are at their widest. Gravity is working FOR rather than against the woman’s pushing efforts. In the  ‘lithotomy’ position (legs up in the air)  the woman is actually forced to push UP against gravity.

Being slightly elevated on the ‘birth bricks’ would give the midwife ample room for her hands to catch the newborn. Also women often would be surrounded by helpers on both sides, offering physical support, affectionate touch and encouragement.

Can't you just imagine if we started bringing bricks into the labour room?!